The Greater Bandon Association has named the April recipient of its Volunteer of the Month award. Bart Taylor has been chosen as GBA continues its third year of presenting this award to the many outstanding individuals that contribute to making Bandon a better community to live in. Bart was presented the award in form of a plaque and a gift certificate from the Rolling Pin at the April 9th meeting of Bandon’s City Council.

As a newer member of our community, Bart has done nothing but give back-and in a huge way. He is a member of the Board of Directors for the Aquatic Center and was one of the chefs for the Center’s Spring Fling. He was an integral part of the Gorse Blossom Festival planning committee. Spending more hours at the Gorse Blossom Festival venue than anyone else during the event, he did all the not-so glamorous jobs and did them with a smile. Bart gives so much as a behind the scenes volunteer because he cares about his community, not because he wants accolades or recognition. He is a fitting example of why the Greater Bandon Association created the award three years ago.

The Greater Bandon Association will be honoring one of Bandon’s many volunteers that are making a difference in the community each month. Nominations for the May award should be e-mailed to harv@greaterbandon.org or mailed to P.O. Box 161 by close of business on April 27th. 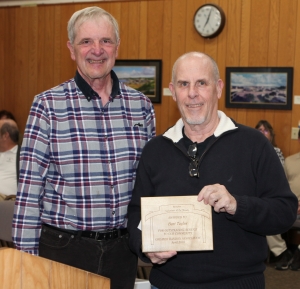