What would the State’s Excellence in Downtown Revitalization Awards be without a Bandon winner? Previously, the Port’s transformation of its Blue Building to the Old Time Marketplace, The Cycle Stop Rest and Repair Station, Devon Boutique’s façade improvement, and the Gorse Blossom Festival were all winners. Tonight, the 2018 awards were passed out in Albany and the Special Events award went to…Bandon’s 4th of July.

In accepting the award, Greater Bandon Association’s Executive Director pointed out that it was a community award representing the work of volunteers for many organizations in trying to provide wall- to-wall dawn through the fireworks activities for residents and visitors alike to celebrate the 4th of July. It was taking traditional events like the Parade, the Lion’s barbeque in City Park and the fireworks and adding things like the Port’s Cardboard Boat Races, the Alive After Five Wine Walk, music and apple pie and ice cream sales. By consolidating and cross promoting, it has allowed each activity to grow.

It is hoped that GBA’s new part-time community events contractor, funded through the same generous grant from Wild River Coast Alliance that is supporting the new full time Executive Director at the Greater Bandon Association, will create even more coordination and growing of local community events.

Rushel Reed also received a Certificate of Appreciation from Oregon Parks and Recreation for her long-time volunteer work for the Greater Bandon Association. 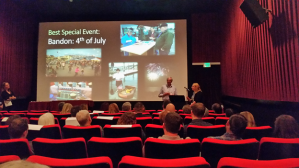